From now on, you who run the most important races around the world will become part of  MASQUEBICI club and will join LA LIGA MASQUEBICI.

There is only one rule, and many rewards: REGISTER in any of the following races through this website at the same price and start scoring.

"The harder the race, the more points you get"

What makes a race tough? The distance and climbing would be the two clearest factors, although not the only ones. It is not as hard a race with good weather as one with cold and rain, so we also take into account the number of dropouts in the race as a factor that establishes that hardness. More people give up more points get those that end. The final classification of each one can not be forgotten, but is the third position really better than the fourth? Must the one that ends 10th in a race of 200, get the same points that the one that ends 10th in a race of 1000 bikers? We believe it is NOT. This is why we score according to the group in which you finish, dividing the number of participants into 4 groups. If you finish inside the first group you have more points than if you finish inside the fourth group.

If you give up we give you the points earned in km and climbing done at the completed stages. (Surely you have had good reasons) and the effort and courage of trying already has much value.

And if you did your registration with us, but you did not participate, just because you trained, you get 100 point.

Many companies and every day more, they see LA LIGA MASQUEBICI as a project for the future and they support highly. Thanks to them we keep on rewarding the best of each modality.

-Distance: 1 point per total official km. Not real mileage or what the GPS of the rider counts.

-Climbing: 0.1 points per official meter of climbing. Not real mileage or what the GPS of the rider counts.

-Dropouts: 10 points per % of dropouts or non-Finishers that the organization publishes at the end of the event.

-Classification: It's calculated in % depending on the participant's number that the organization publishes at the start of the race. If there are 100 participants:

If you were registered to the competition with us, but did not participate, you get 100 points just for the training.

3rd Services pack: Mechanical and massage services for the race that you choose.

First competition of the year on our national calendar, where we will be offering our services: mechanical and massage service.

Andalucía Bike Race is the most important and highest level race by stages of the entire national scene, where the best Spanish and foreign riders...

Rioja Bike Race will take us to discover the best tracks in the surroundings of Logroño, in the heart of La Rioja. Designed and sponsored by the...

The Belgian Mountainbike Challenge, in short the BeMC, is a four day stage race in the Belgian Ardennes, a region know from the famous battle of...

The great adventure of the desert, a challenge for all those who dream of conquering the sands of the desert. 600 riders, more than 600 kms and...

Until now, TRANSPYR is the great adventure that will take us to connect the Mediterranean with the Cantabrian crossing the Pyrenees from east to...

Track, area, date, format, facilities, etc. This competition has all the ingredients for the bikers who love great emotions to discover the ALPS...

Andorra 21 Ports is an individual road cycling race in stages.

Bikers will face the most spectacular ports at the country of the Pyrenees....

The Andorra MTB Classic-Pyrenees stage race offers a new race format in the country of the Pyrenees.

Included in one of the most recognized...

La Leyenda, South America's most prestigious mountain bike stage race, where adventurous professional and amateur cyclists from around the world...

Discover Ghengis Khan’s territory, following its tracks through an unknown and remote country, in the best possible way on YOUR BIKE participating...

The Swiss Epic is a demanding yet rewarding 5-day stage race. With a fresh new route each year, it’s a unique test of endurance, resolve and skill...

This year Catalunya Bike Race goes back to 3 stages. Made by the world MTB legend Jose Hermida, he designs the tracks, as it’s his place of... 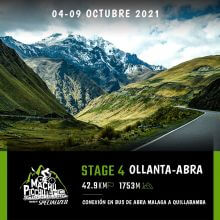 Machu Picchu Epic is a 5-stage Marathon race, which links the best of MTB with the tourist attractions of Cusco. The competition will take place...

The race of the races, the dream of every biker, 7 stages in the most famous competition in the MTB world.

The FNB Wines2Whales was born out of the desire to establish a world-class 3-day stage race in the Western Cape of South Africa. Since inception...

4 stages crossing impressive landscapes that have never been crossed by bicycle before. The participants will embark on a human and sports...

Exclusive Mountain Bike race that will take place in the heart of the wonderful Chilean Patagonia
5-stage career in the Patagonia area, in...